Almost 35 years ago, the US Congress introduced the Drug Price Competition and Patent Term Restoration Act, commonly known as the Hatch-Waxman Act, that created a pathway for generic drugs to enter the market before the expiry of the innovator’s drug patents. The Hatch-Waxman Act allowed the generic companies to file an Abbreviated New Drug Application (ANDA) with a Paragraph IV certification, stating that the innovator’s drug patents listed in the US Food and Drug Administration’s Orange Book (OB) are invalid, unenforceable or will not be infringed by the generic product. The submission of a Paragraph IV certification sets in motion a series of events eventually leading to the filing of an infringement proceeding in the District Court by the innovator company against the ANDA filer. For nearly three decades, this was one of the primary patent litigation frameworks available for challenging the validity of pharmaceutical patents.

More recently, the Leahy-Smith America Invents Act (AIA) passed by the US Congress on 16 September 2011 and implemented a year later, brought about an alternative litigation pathway for the generic companies. The AIA introduced two new ways of challenging the validity of an issued patent - the Inter Partes Review (IPR) and Post Grant Review (PGR) challenges. These post-issuance challenges replaced the earlier reexamination procedures available in the US Patent and Trademark Office (USPTO) as it was felt that those procedures had become “too lengthy and unwieldy to actually serve as an alternative to litigation when users are confronted with patents of dubious validity.” The IPR and PGR proceedings are initiated in the USPTO before the Patent Trial and Appeal Board (PTAB), an adjudicatory board created by the AIA. These proceedings differ from conventional patent infringement proceedings, initiated in the US District Court by the innovator companies, as they are more cost-effective and time-saving.

IPR proceedings are initiated by a third party for cancellation of one or more patent claims as they are not patentable. However, there are stringent conditions for initiation of the IPR proceedings and the patent validity can be challenged only on the basis of:

The basis for raising PGR proceedings are comparatively lenient. The patent validity can be challenged on the basis of not only 35 USC §102 and §103, but also on §101 (subject matter ineligibility) and §112 (indefiniteness, lack of enablement, or failure to meet the written description requirement). Also, other than patents and patent publications the petitioner can also rely on evidences such as prior art public uses, on-sale activities and other public disclosures.

Other than the grounds for challenges, the IPR and PGR proceedings differ in several ways. Three primary differences are in relation to applicability, timing to file the petitions and legal standards for institution of the trials (Table 1). 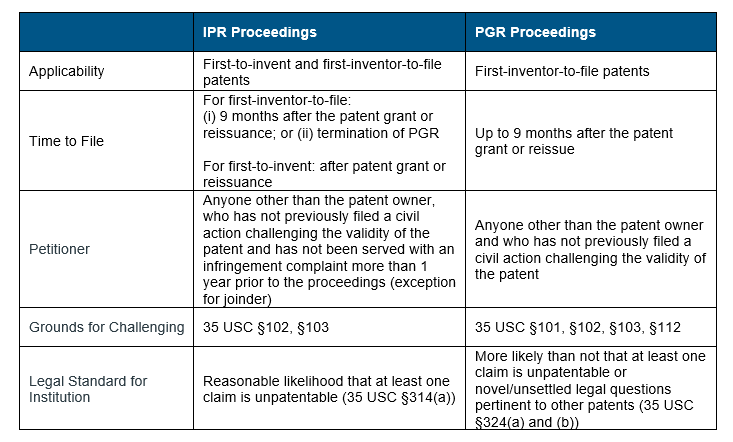 As an IPR proceeding can be filed any time, without any restriction on the type of patent system and with lower legal standards, they are quite a popular choice for the petitioners (Figure 1). 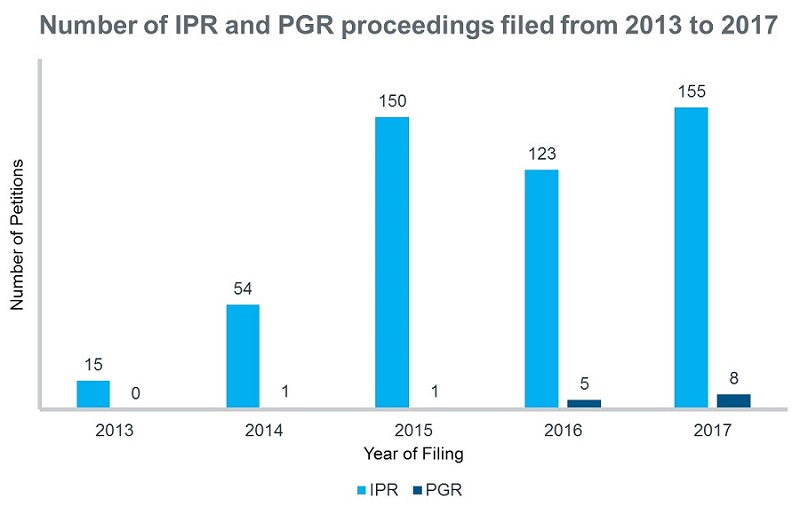 Figure 1: A comparison of the number of IPR and PGR proceedings filed from 2013 to 2017 according to Ark Patent Intelligence Litigation module

There are strict timelines that the PTAB follows during IPR and PGR proceedings (Figure 2). Both of these proceedings take the same amount of time – 12 to 18 months from the institution of the petition with an exception of up to 6 months for “good cause”.  The proceedings are initiated when a petition is filed by a third party challenging the validity of a patent. Within 6 months of the petition being filed, the PTAB decides on whether the IPR should be instituted or dismissed. If the trial is instituted, the PTAB will issue a final written decision within 12 months of institution. Any party that is dissatisfied with the final decision may file for a rehearing with the PTAB within 30 days of the decision or appeal to the Court of Appeals for the Federal Circuit (CAFC) within 63 days. However, if the trial is not instituted on any challenged claim then the petitioner can seek for a rehearing with the PTAB within 30 days of the institution decision and if it is instituted on at least one challenged claim then within 14 days. Neither the institution decision nor the rehearing decision can be appealed to the Federal Circuit.

Advantages of IPR and PGR Proceedings

The IPR and PGR proceedings provide a gamut of advantages to the generics over conventional civil actions. The main benefits are as follows:

The combination of these benefits makes these post-issuance patent challenges quite a lucrative choice for the generics and biosimilars looking to enter the market. One such drug that had a different outcome at the PTAB after failing at the District Court, is Rivastigmine.

The popularity of post-issuance challenges has been increasing since their inception in 2012. Although currently there are far fewer PGR than IPR proceedings filed, these are likely to increase as there will be more patents that will have at least one claim filed after 16 March 2013. Both proceedings provide a potentially cost and time-effective alternative for generic companies to challenge an issued patent and enter the market.

Register to the INNsight Newsletter for regular updates on patent intelligence.