Needless to say, GMP is not only a way to ensure that the finished product is safe for market distribution, but, it also acts as a means to boost a country’s pharmaceutical export and local production.

This article delves into the history of GMP in Russia and highlights the shifts in the Russian pharmaceutical market as a result of the implementation of GMP.

The history of GMP in Russia can be traced back to the 1990s. Until 1991, all property in Russia belonged to the State. Material supply to industries was controlled by the State. The State set quality control standards and only the State had the legal right for production and negotiation with customers. The early 1990s saw the elimination of the State from the majority of these roles. The only role the State oversaw was the quality control standards and their validation. Soon movements began for the implementation of the EU GMP guidelines in Russia. Two approaches were proposed – to create some guidelines specific to Russia which would be supervised by the State or to directly implement the EU GMP guidelines. In 1991, nation-specific GMP laws were enforced in Russia and amended in 1998. They were essentially a compilation of EU GMP laws with some amendments which made them way more rigid than the existing EU GMP laws. Later on, in 2004, Russia adopted the EU GMP guidelines as it is and oversaw its enforcement. Figure 1 gives a chronological overview of GMP history in Russia. 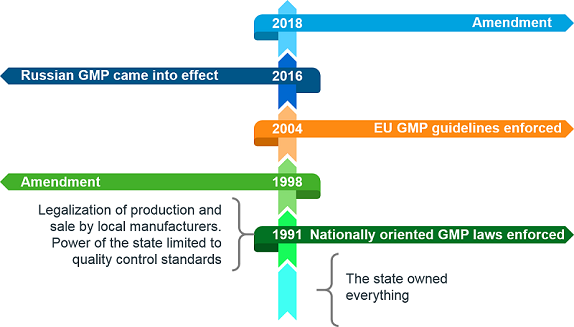 Impact of Russian GMP on the Russian Market

Russia has long been a key market for the European pharmaceutical industry. The fact that since 2004, Russia has been following the EU GMP guidelines seems to have strengthened the export of pharmaceuticals from Europe. As of January 2016, Russia stopped following EU GMP guidelines and enforced its own local GMP guidelines. As per this regulation, Russia requires a local GMP certificate for all local manufacturers. Also, foreign producers/distributors entering the Russian market need to possess a Russian GMP certificate for the filing of all regulatory actions like Market Authorization, Authorization Renewals, change in Product Information, Safety etc.

Presumably, in a show of bias towards local manufacturers, Russia enforced this requirement without providing any transition period. Consequently, the lengthy timeline of the inspection process and lack of transition period proved to be a big hindrance for GMP approvals for foreign traders and their access to the Russian market started to get impacted. On the other hand, for local manufacturers or local manufacturing sites, a manufacturing license can be accepted alternately, in lieu of GMP certificate. This gave them an upper hand over the foreign traders and cemented their place in the Russian pharmaceutical market. Ergo, in 2016/17, Russia saw a drop in the New Drug Registrations filed by foreign companies. As per an article released by European Federation of Pharmaceutical Industries and Associations in 2018, only 35 new Marketing Authorizations were filed by foreign companies in Russia in 2017 , representing 1/10 of the usual trend. Sales of already marketed products by foreign companies also saw a drop owing to the fact that filing for a change in Product Information/Safety also requires the company to have a Russian GMP certificate.

Numerous appeals and the active involvement of the European Commission coerced the government to introduce certain amendments in its GMP guidelines. As of June 2018, Amended Russian GMP guidelines were enforced. The new regulation allows foreign traders to simultaneously apply for both New Drug Registration/Market Authorization/Authorization Renewals and Russian GMP, permitting both processes to run in parallel. Moreover, foreign companies filing for a change in safety information of product no longer need to submit a copy of their Russian GMP certificate. Furthermore, the new guidelines have lifted the ban for a company to market the same product with different trade names. This ban prevented manufacturers from marketing a product locally and engaging in the production of the same product for a third-party. Rescinding this ban now allows a local manufacturer to produce a medicine for distribution in Russia and produce the same medicine for a foreign manufacturer under a contract production agreement, opening up the possibilities of Contract Manufacturing opportunities for local manufacturers. Enforcement of the amended guidelines seems to have opened up new possibilities and opportunities for local manufacturers as well as for foreign traders, thereby, heralding some stability in the Russian pharmaceutical market for now.

Although there are many other elements which have been key deciding factors in the recent economic trends in Russia, enforcement of local GMP guidelines in Russia surely did bestow a boost to the Russian economy in terms of increasing the market hold for local manufacturers and reducing market access for foreign companies. Comparatively, the recent revisions in the Russian GMP guidelines seem to be stabilizing the market – providing new opportunities for local manufacturers in terms of undertaking contract production agreements and also providing export opportunities to foreign companies.

Keeping in line with the current regulatory affairs, IQVIA Chemical Info has taken measures to ensure that these regulatory revisions are reflected in our database. Existing Russian companies in the database have been successfully updated with emphasis on their accreditations/certfications and new Russian companies that have obtained GMP approval from the government have also been added.

Register to the INNsight Newsletter for regular updates on chemical information.