A recent IQVIA webinar on the impact of COVID-19 on U.S. health systems featured a look at one of the health systems in the country hit hardest by the pandemic: Phoebe Putney Health System in Southwest GA. J. Scott Steiner, president and CEO of Phoebe, gave an inside look at how his organization managed the worst of the crisis, what Phoebe’s recovery has been like, and what it’s planning for the future…

Phoebe’s flagship hospital is located in Albany, Georgia, a small community surrounded by rural America that drew national attention when early in the pandemic it ranked fourth in the list of places with the most COVID-19 cases per 1,000 people – behind only New York City, Italy, and Wuhan, China. “We were aware of the virus in January and February, but never dreamed that in a short time we’d be near the top of a list that no one wants to be on,” said Steiner.

The four hospitals in the Phoebe Putney Health System, which serve a 41-county area, identified its first patient on March 10, and a month later, had 183 admitted patients with symptoms.

Steiner was one of the first healthcare executives in the country to communicate the level of supplies and resources required to mount an effective response to the outbreak. In his view, the following tactics were critical to Phoebe’s ability to cope:

And then there was sheer grit and determination. “We were all working 18-hour days, seven days a week to make sure that our staff had PPE, to find additional staffing resources, and to figure out how we could expand our capacity,” recalled Steiner.

In mid-April, Steiner assembled a task force that met twice a week to plan how Phoebe hospitals would re-open for elective procedures. “We knew people were home, waiting in pain and that we would need to restart,” said Steiner. By May 4th they were open for elective surgery, scheduling patients based on the Medically Necessary Time-Sensitive (MeNTS) Prioritization scoring system developed by the University of Chicago.

At the time of the webinar (June 24), the number of COVID-19 cases Phoebe was treating had plateaued at around 30. Albany hasn’t seen a second spike, although the virus is still circulating in the community. The cases, Steiner reports, are also less severe, perhaps because the virus had already stricken the most vulnerable. Interestingly, Phoebe is not seeing any difference in the recovery, complication rates, or mortality for patients who test positive for COVID-19 and undergo elective surgeries than for those patients who test negative.

Steiner reported that Phoebe’s many out-patient clinics were at about 85 percent of their pre-COVID-19 volumes, when in-person and telehealth visits were combined. Urgent care was at about 60 percent of pre-COVID-19 volume, perhaps because of the availability of the telehealth option. In-patient volumes are around 90 percent of what they were before the crisis, perhaps reflecting the success of the system’s “Ready, Clean, Open” campaign.

Looking Ahead with Caution

Phoebe Putney Health System now has the benefit of its own difficult experience in planning for the weeks and months ahead. Steiner reports that the organization is using CARES Act funding to refine its surge plans, with rapid testing and contact tracing being two vital components. Phoebe is putting together a “mini-army” of volunteer contact tracers consisting of retired doctors, nurses, and other healthcare professionals.

Phoebe is also shifting some more investment to telemedicine, given how successful it has been – and given its potential to drastically reduce costs. The Centers for Medicare and Medicaid Services (CMS) is reimbursing for telehealth visits at the same rate as for in-person visits during the pandemic, and the agency is considering doing so permanently1. If a large portion of normal foot traffic into clinics can be redirected to virtual visits, it could reduce costs for “brick and mortar” facilities substantially. “I think telehealth is here to stay and will change the financial picture for health systems,” Steiner predicted.

Phoebe Putney Health System has weathered the worst of the COVID-19 crisis and is wisely using the lessons it learned to prepare for a subsequent waive. We thank J. Scott Steiner for his time and candor in sharing his story with us. 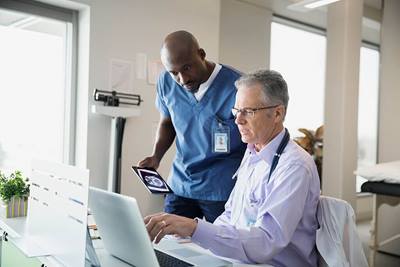 This webinar will provide an update on the COVID-19 outbreak in the United States, and outline potential scenarios, considerations, and decisions that healthcare systems should plan for.
Learn more
You may also be interested in