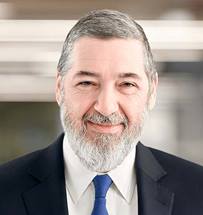 Prior to his appointment at IMS Health, Ari spent 14 years at United Technologies Corporation (UTC), the parent company of Otis Elevator Company, Carrier Corporation, UTC Power, UTC Fire & Security, Pratt & Whitney, Sikorsky Aircraft and Hamilton Sundstrand, where he held several senior leadership positions. Ari joined UTC in 1997 as chief strategy and development officer, became chief operating officer of Otis in 2000 and president and chief executive officer of Otis in 2002. In 2008, Ari was appointed president of UTC Commercial Companies with executive leadership responsibility for the worldwide operations of Otis, Carrier, UTC Fire and Security and UTC Power, generating $36 billion in annual revenues and leading a team of 150,000 employees around the world.

Ari is a former partner at global management and technology consulting firm Booz Allen Hamilton. He joined the firm in 1987 as an associate and was elected to its partnership in 1992.

Ari has been serving on the board of directors of The Home Depot since 2007, and is a member of the Harvard Medical School Health Care Policy Advisory Council. In 2008, Ari was appointed by the President of the United States to serve on the President’s Commission on White House Fellowships.