Migraine is a common neurological condition that is characterized by highly incapacitating, recurrent, primary headaches that can last for 4 to 72 h. The typical manifestation of migraine headaches includes debilitating throbbing pain around the eyes and temples that is often unilateral and pulsating in nature, and is accompanied by photophobia, osmophobia, nausea, emesis, loss of appetite and sometimes perceptual disturbances called aura. More than 90% of patients with migraine are unable to work or function normally during their migraine attacks. According to the World Health Organization’s 2012 global burden of disease figures, migraine is ranked in the top 40 conditions causing worldwide disability, above all other neurological disorders other than stroke, meningitis and epilepsy. It is the third most prevalent illness in the world, affecting 39 million in the USA and 1 billion worldwide. Migraine disproportionately affects women – 18% of women, 6% of men and 10% of children experience migraine.

Patients experience migraine episodes which are often volatile. In some patients, migraine is related with allodynia or specific triggers increasing the susceptibility to migraine attack. Some of the factors that potentially trigger migraine attacks include stress, environmental stimuli like weather or bright lights, hormonal fluctuations in women, hunger, too little or too much sleep, dietary elements (wine, caffeine, monosodium glutamate, artificial sweeteners, nitrates) and odors (perfumes, cigarette smoke).

The trigeminovascular pathway: role of CGRP in migraine

Over the past 300 years, migraine pathophysiology has been dominated by two main theories – the vascular theory and the central neuronal theory. Based on vascular theory, vasoconstrictors such as ergotamine and the triptans have been conventionally used for migraine management. However, during the 1980s, evidence emerged that bolstered the involvement of neuronal mechanism and the central role of trigeminal ganglion and calcitonin gene-related peptide (CGRP), a vasoactive neuropeptide, in primary headache pathogenesis. Migraine triggers are likely to cause primary brain dysfunction, which cause cranial vasodilation and mechanical activation of trigeminal sensory nerve fibers. Neuronal excitability of cerebral cortex and trigeminal nucleus leads to a pain response that is conveyed to the brainstem and evokes release of vasoactive peptides including CGRP from trigeminal fibers. These peptides exacerbate vasodilation, neuronal inflammation and transmission of central nociception. Based on this mechanism, recent prophylactic therapies, which include either CGRP receptor antagonists (the gepants), or monoclonal antibodies (mAbs) to CGRP or its receptor, have evolved that cause functional blockade of CGRP release into the cranial venous outflow for acute and chronic migraine management.

As enlisted in Table 1, antiepileptics, antidepressants and antihypertensives, that were originally not developed for migraine prevention have been used as off-label drugs to prevent or reduce migraine attacks. Several of these prophylactic medications have intolerable side effects, must be taken daily and are associated with variable efficacy. The CGRP inhibitors make up the first drug class developed specifically for migraine headache. There are 2 different classes of drugs inhibiting CGRP to prevent migraine: monoclonal antibodies (mAbs) and small molecule CGRP receptor antagonists (gepants).

mAbs represent an attractive prospect for migraine treatment as they have a long half-life that make them suitable to act on chronic migraine attacks. Moreover, they can be designed to have precise, long duration of activity that prevents frequent dosing, e.g. once or twice monthly thereby increasing patient compliance and reducing side effects. In addition, antibodies are highly specific, allowing them to have highly selective targeting of either CGRP or its receptor.

There are two types of CGRP inhibitor mAbs:

Soon after the role of CGRP in migraine was elucidated in molecular pathology studies, small molecule “gepants” were the first class of anti-CGRP drugs that were investigated for migraine. The initial products demonstrated a reduction in pain compared with placebo, but further development was discontinued in lieu of incidence of hepatotoxicity. After nearly a decade, the development of the gepant class has resumed, with a next-generation of agents that do not produce the metabolites implicated in causing hepatotoxicity.

The landscape of anti-CGRP therapies that are in active development for migraine, as depicted in Figure 1, includes three marketed products, four in phase III evaluation, one in phase I evaluation and one in preclinical evaluation. 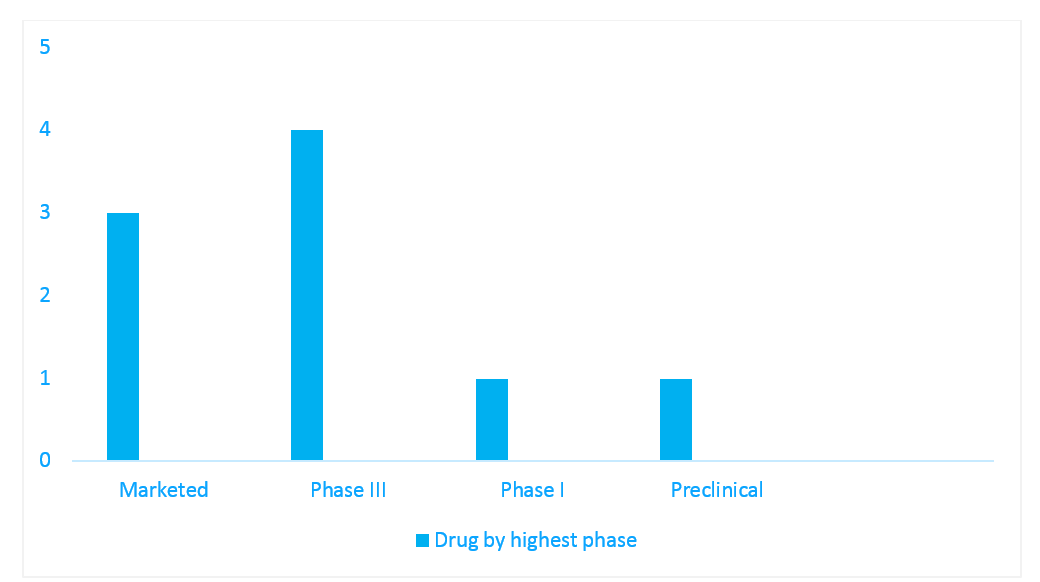 Most of the patients who have a migraine attack begin by treating themselves with over-the-counter medications. None of the other medications used in clinical practice earlier were specifically designed for the prevention of migraine. The advent of the CGRP inhibitors heralds a paradigm shift in the treatment armamentarium for migraine. Antagonists of the CGRP pathway, especially mAbs, have proven to be efficacious and safe preventative therapies for episodic and chronic migraine in clinical trials, however, more real-world evidence is warranted as there is an absence of long-term experience with this class. CGRP and its receptors are widely prevalent in both the vasculature, and in the peripheral and central nervous system, and are involved in several physiological processes. Therefore, blocking CGRP may pose a risk in patients with comorbidities such as cardiovascular diseases. Mild injection-site pain, pruritus and erythema were the common adverse events reported in patients treated with the CGRP inhibitor mAbs. There are also no head-to-head comparison trials between these drugs to hand-pick the most efficacious and safe CGRP inhibitor for migraine management.

A draft evidence report from Institute for Clinical and Economic Review (ICER) concluded that while CGRP inhibitors are projected to have a positive impact on the health of patients with chronic or episodic migraines for whom earlier preventive therapies have failed relative to no treatment, it is likely that the inhibitors will exceed willingness-to-pay thresholds per quality-adjusted life year (QALY) in the general population. ICER also found that treatment with CGRP inhibitors resulted in higher total costs, more migraine-free days and increased QALYs compared with no preventive treatment, in both chronic and episodic migraine in patients who failed prior treatments. In conclusion, given the high cost of these mAbs, physicians should identify patients who are responding well to conventional therapies and adhere to these medications; CGRP inhibitors should be reserved as a frontline treatment option for patients with refractory migraine episodes in whom prior preventive therapies have failed.

Register to the INNsight Newsletter for regular updates on pipeline intelligence.