In the thirty-five years since the passage of the Orphan Drug Act (ODA) in 1983, the structure of development incentives laid out in the legislation has successfully spurred investment and innovation in rare disease therapies. Recent legislative discussion has focused on whether the ODA development incentives are working as intended or being manipulated for commercial gain. This report is a companion analysis to an examination of the orphan drug market published by the IQVIA Institute in October 2018, “Orphan Drugs in the United States: Growth Trends in Rare Disease Treatments,” and sheds new light on this topic with information on the sequence of orphan drugs’ orphan and non-orphan indication approvals and their associated patent and market exclusivities. It also examines orphan drug pricing relative to patient numbers, how those prices change over time, and – in a first-of-its-kind comprehensive analysis – compares current disease epidemiology to the number of treated patients to demonstrate the challenges in bringing orphan drugs to patients even after they’re approved.

One of the key aspects of the Orphan Drug Act of 1983 is a seven-year market exclusivity granted to drugs that treat rare diseases. Since the passage of the Orphan Drug Act, a total of 503 drugs have received orphan status from the FDA. Of these, 217 drugs (43%) are now no longer protected by either orphan designations or patents, and yet only 116 (23%) of these unprotected medicines currently face generic or biosimilar competitors. This means just under half of the unprotected products still have not faced competition, some even decades after their exclusivity lapsed. The report additionally finds that it is most often the lapsing of patent exclusivity that enables competition and not the lapsing of orphan drug exclusivity.

In our earlier report, “Orphan Drugs in the United States: Growth Trends in Rare Disease Treatments,” most orphan drugs were seen to have relatively low prices, and those that do have exceptionally high-prices, treat very few patients. This report builds on that analysis and demonstrates that companies have consistently raised prices for orphan drugs more slowly than other branded drugs in the market, historically, as well as in a time-aligned comparison relative to the addition of orphan status for a drug. Compared to the orphan drug market as a whole, spending on unprotected orphan drugs not experiencing generic competition is modest, with drugs on average reaching just over $100 million in spending in 2017 after approximately 10 years without a competitor. Excluding eight drugs with the greatest spending, the average spending on orphan brands not experiencing generic competition drops to just over $22 million in 2017.

A comprehensive epidemiological examination indicates that treated patients represent approximately 10% of disease prevalence for rare diseases, with notable exceptions. Generally, orphan drugs target fewer than 200,000 patients, though the actual target populations vary significantly, and around a quarter of orphan drug approvals target populations smaller than 5,000 patients in the United States.  Further, some rare diseases see fewer than 1% of their prevalent patients receiving orphan medicines given that diagnosis and treatment of some rare diseases with very small populations remains complicated even in the presence of effective treatments. This demonstrates the need for a concerted effort to disseminate treatment guidance to the wider medical community and to patients once a drug is approved.

Of all 503 drugs that have received orphan designations, 217 are now no longer protected by either orphan exclusivity or patent designations, but only 116 of these currently face generic competitors 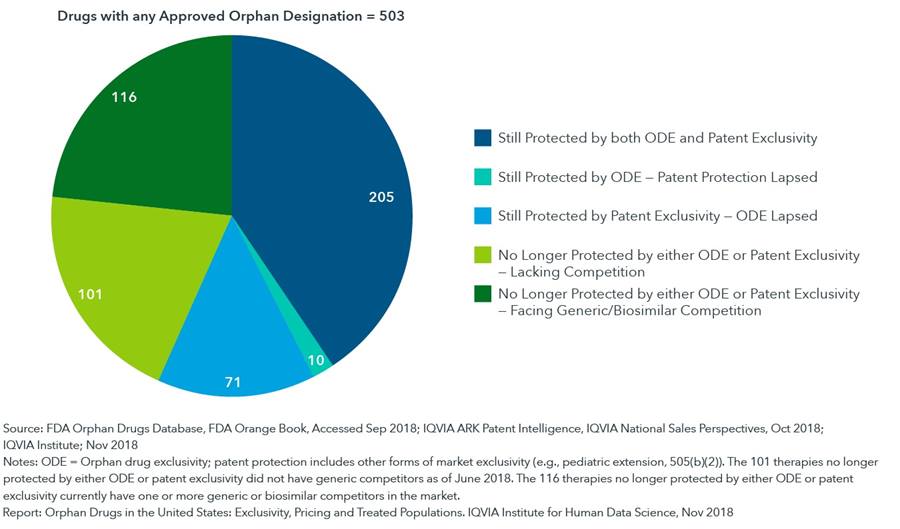 The median annual spending of orphan drugs no longer protected by either orphan drug exclusivity or patent protection was $8.6 million in 2017, reflecting very limited commercial opportunities for potential generic challengers 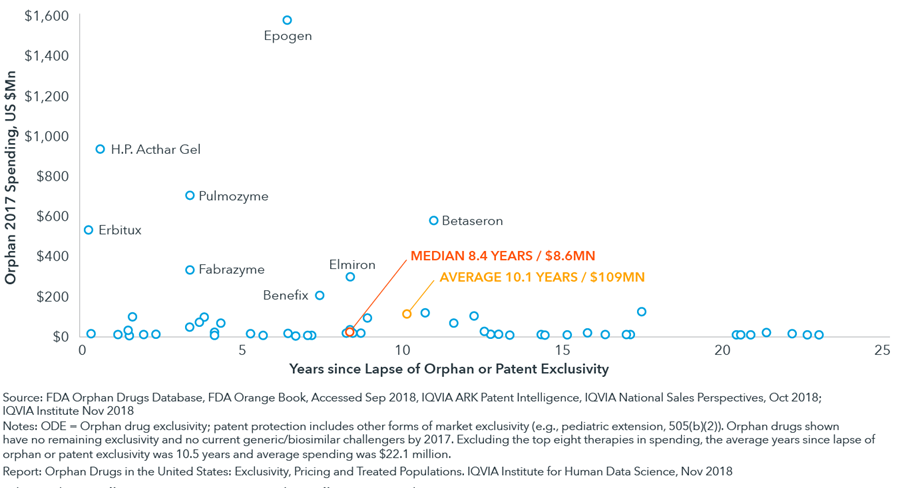 Over the past five years, orphan drugs have exhibited average price growth below the rate of the total branded market

When diseases treated by orphan drugs are measured by estimated incidence or prevalence, an average of 10% of patients are receiving treatment with those drugs 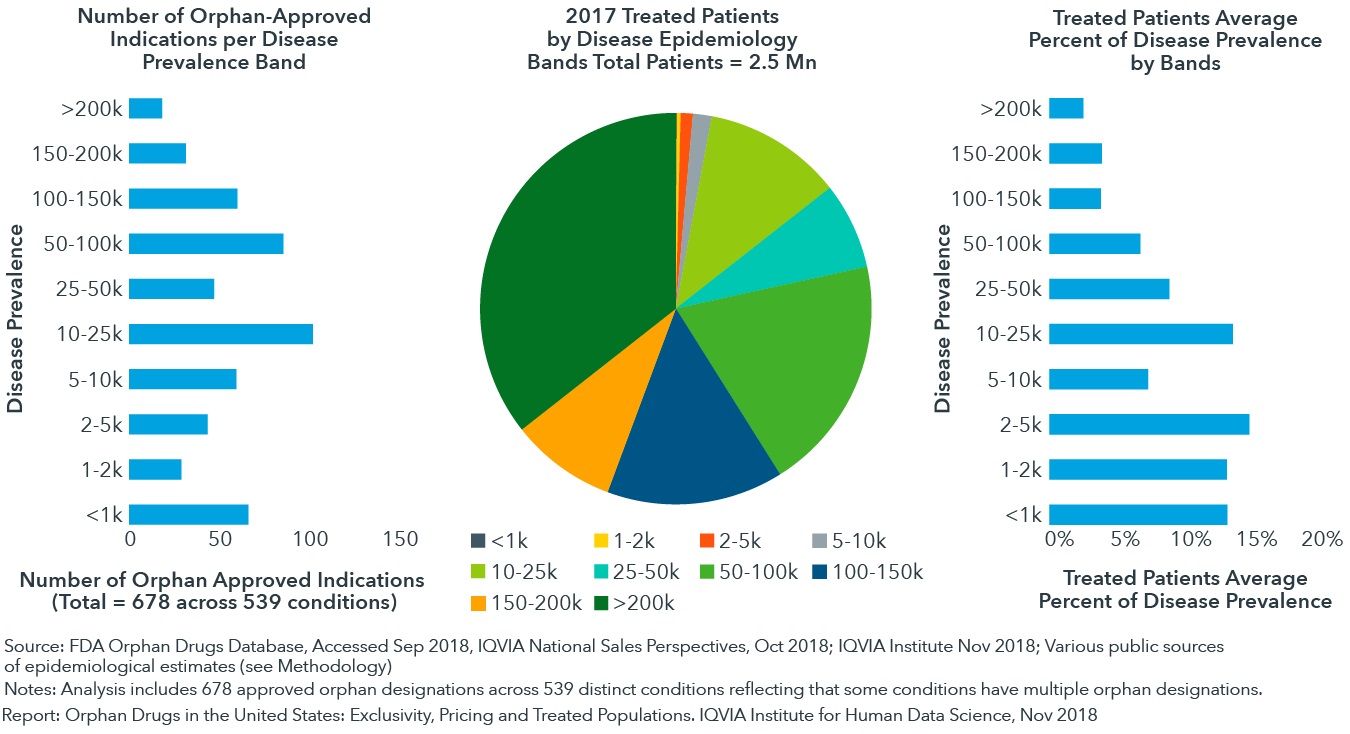 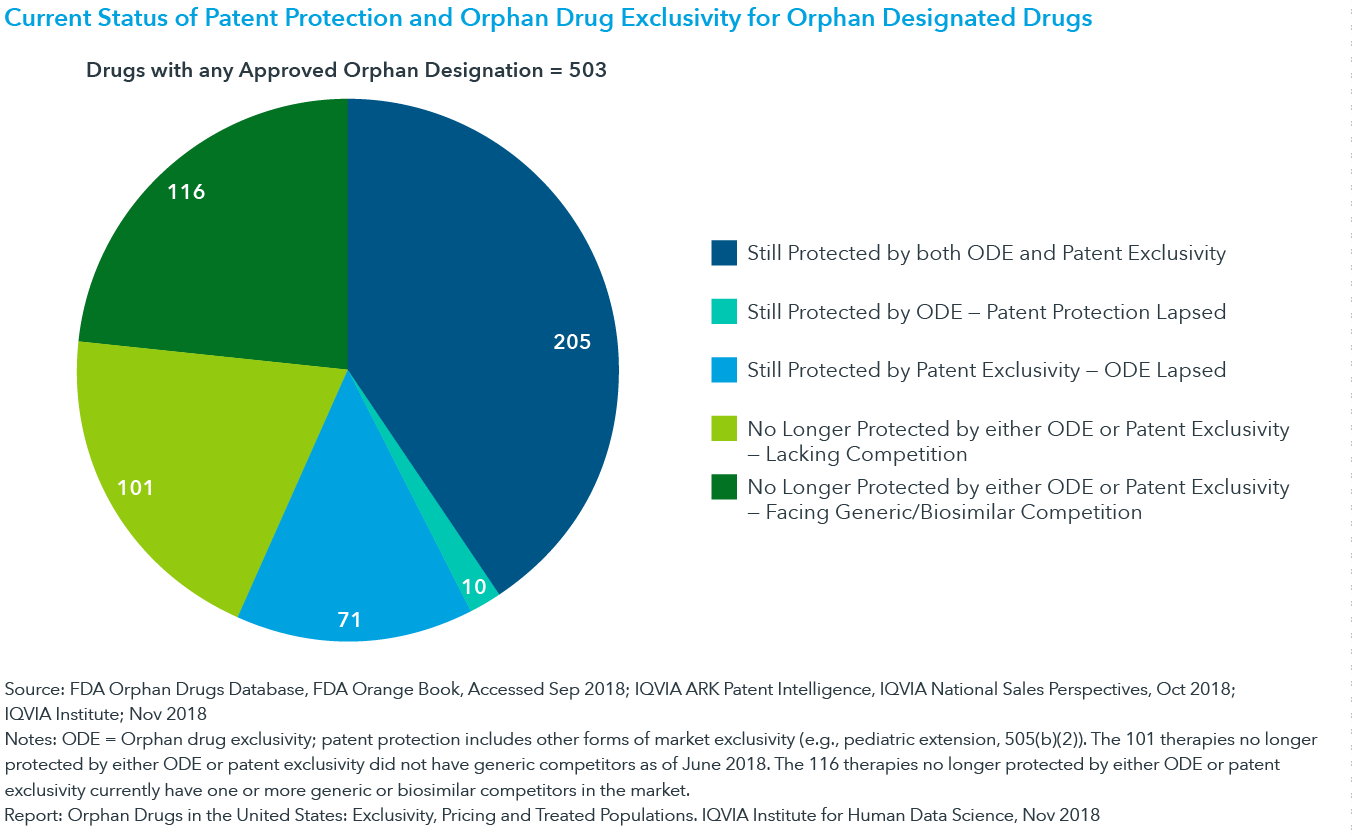 Chart 2: Spending on Orphan Drugs No Longer Protected by Either Orphan Drug Exclusivity or Patent Protection 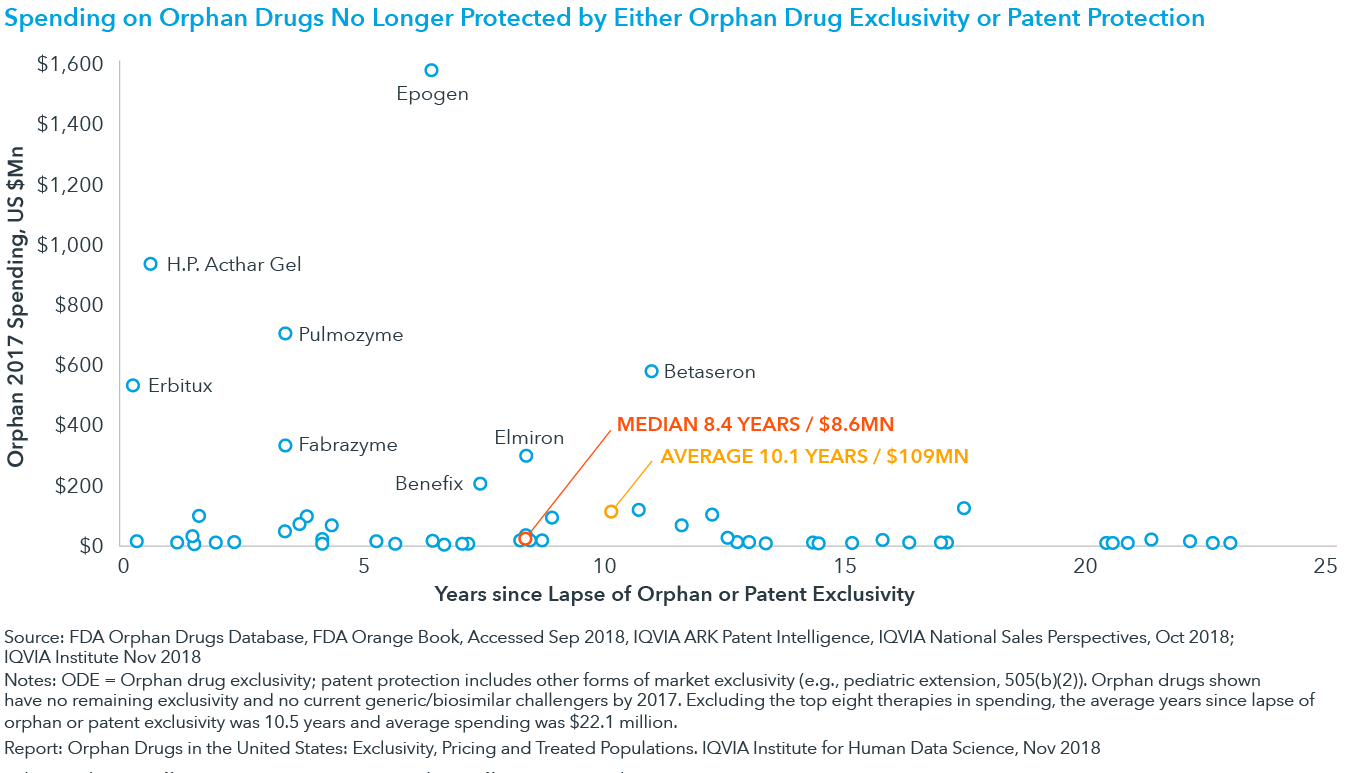 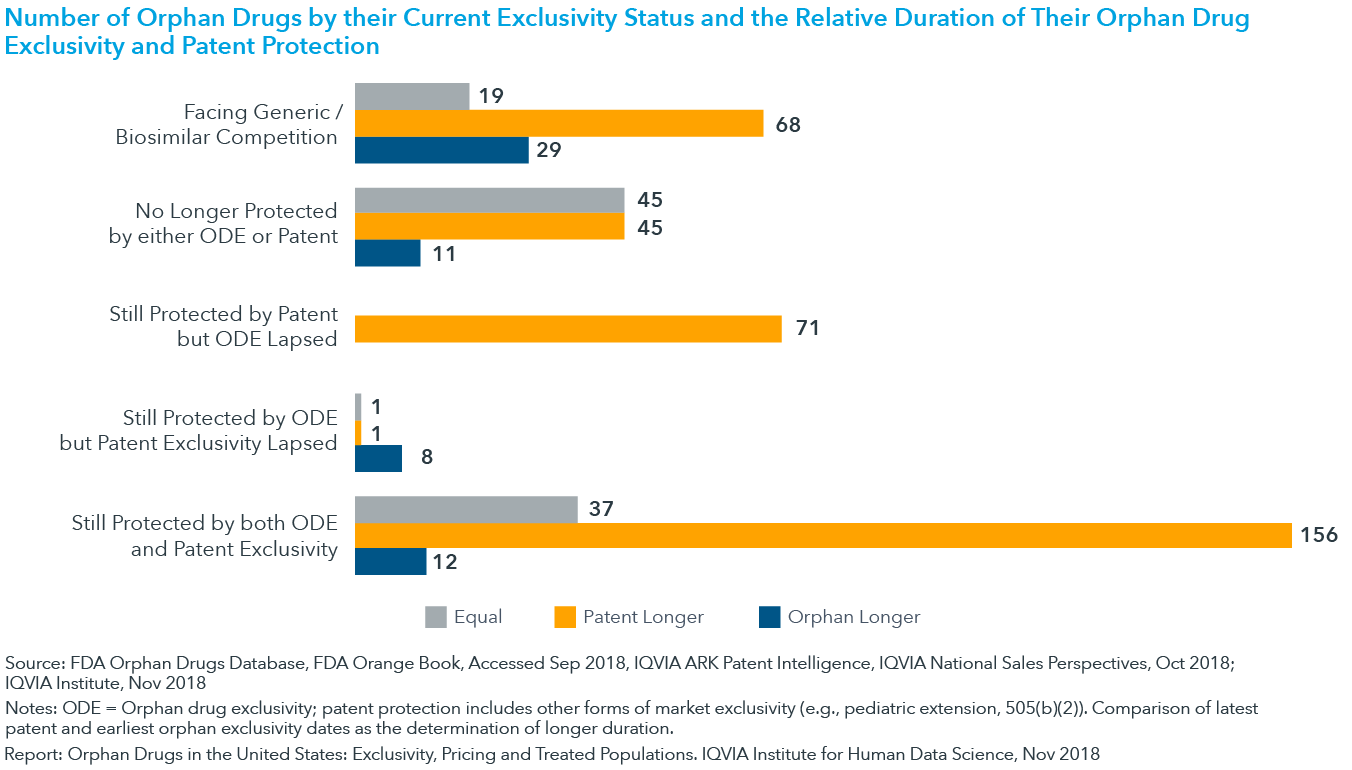 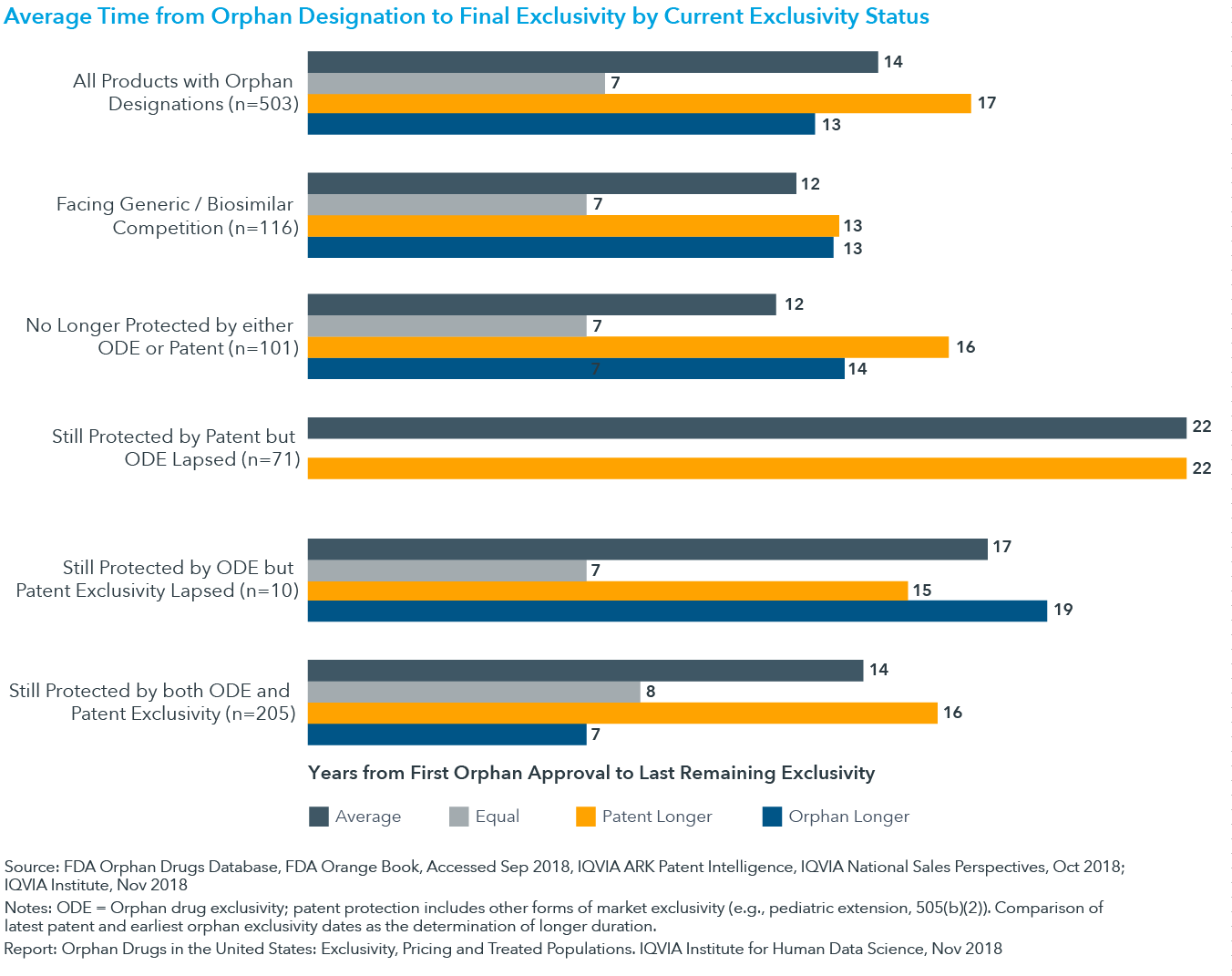 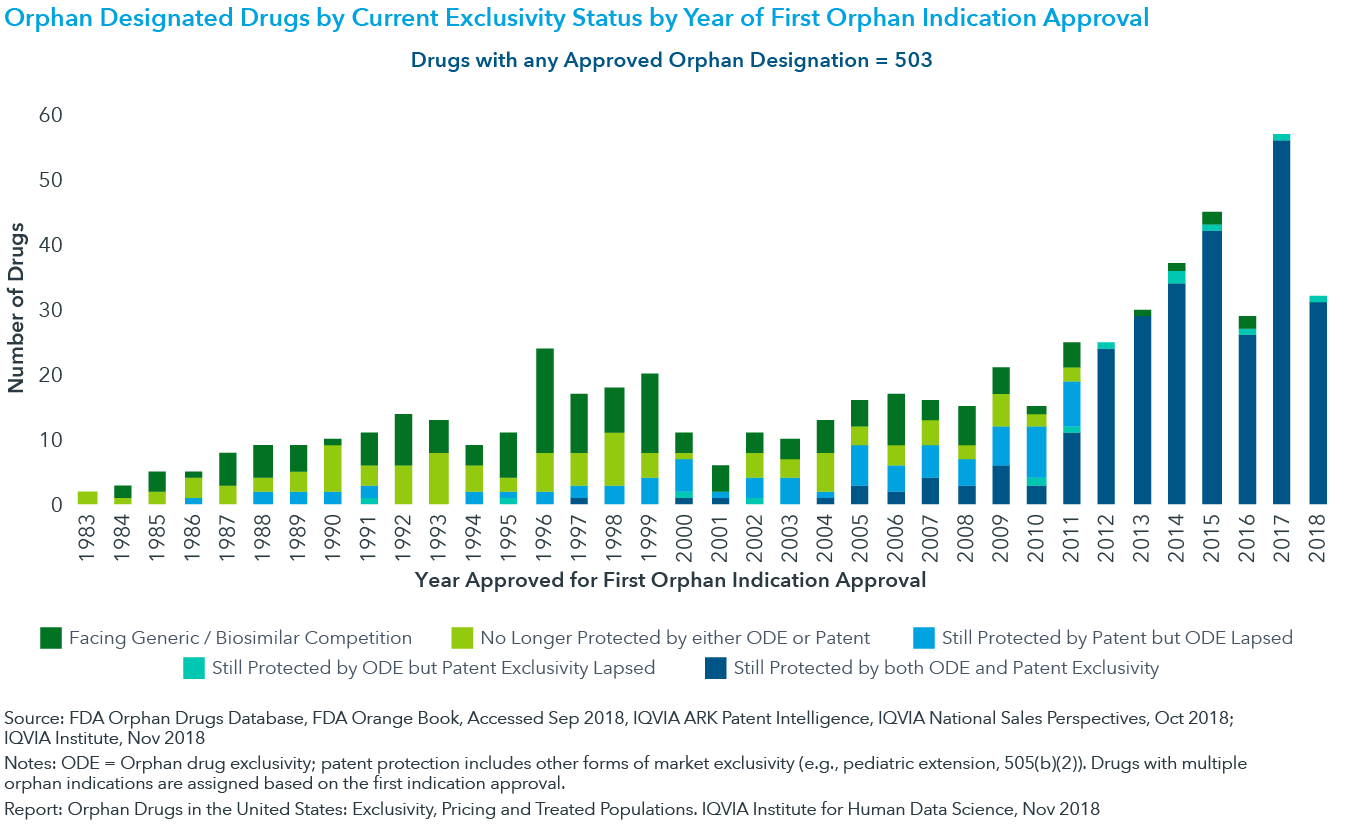 Chart 6: Orphan Designated Drugs with and without Patent Protection and Orphan Drug Exclusivity by Availability 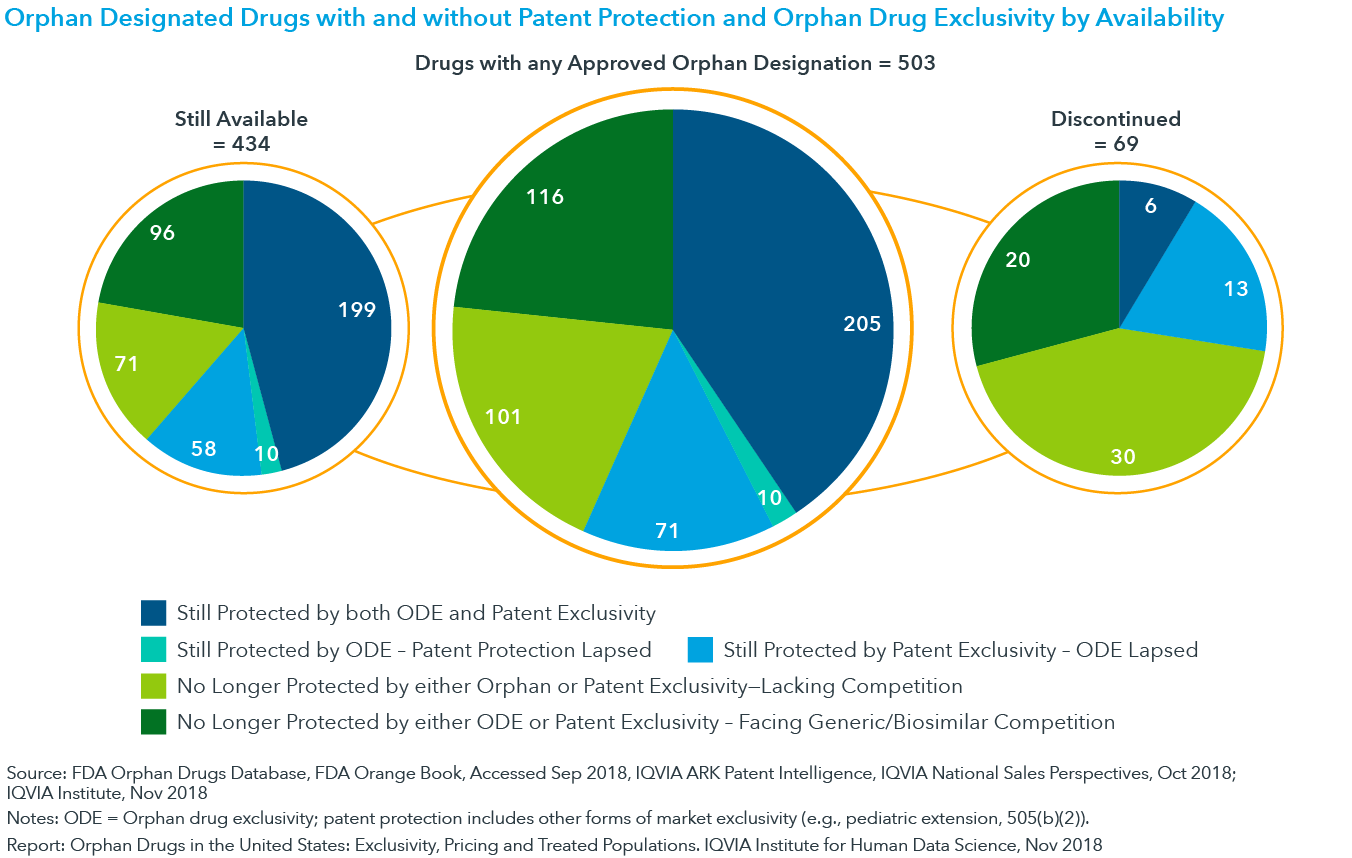 Chart 7: Estimated Target Patient Population Versus Cost for Orphan Drugs in the United States in 2017, US$ Thousands 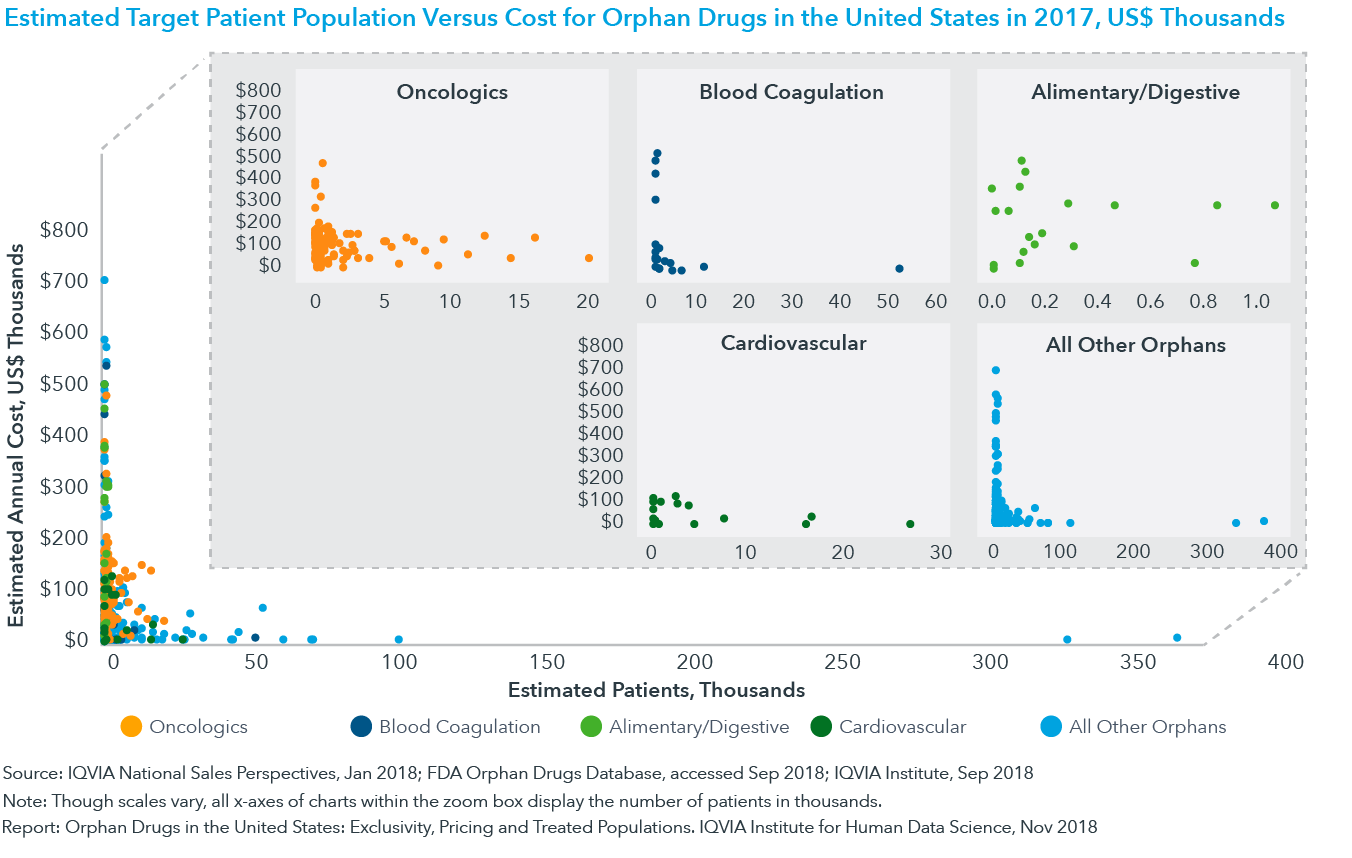 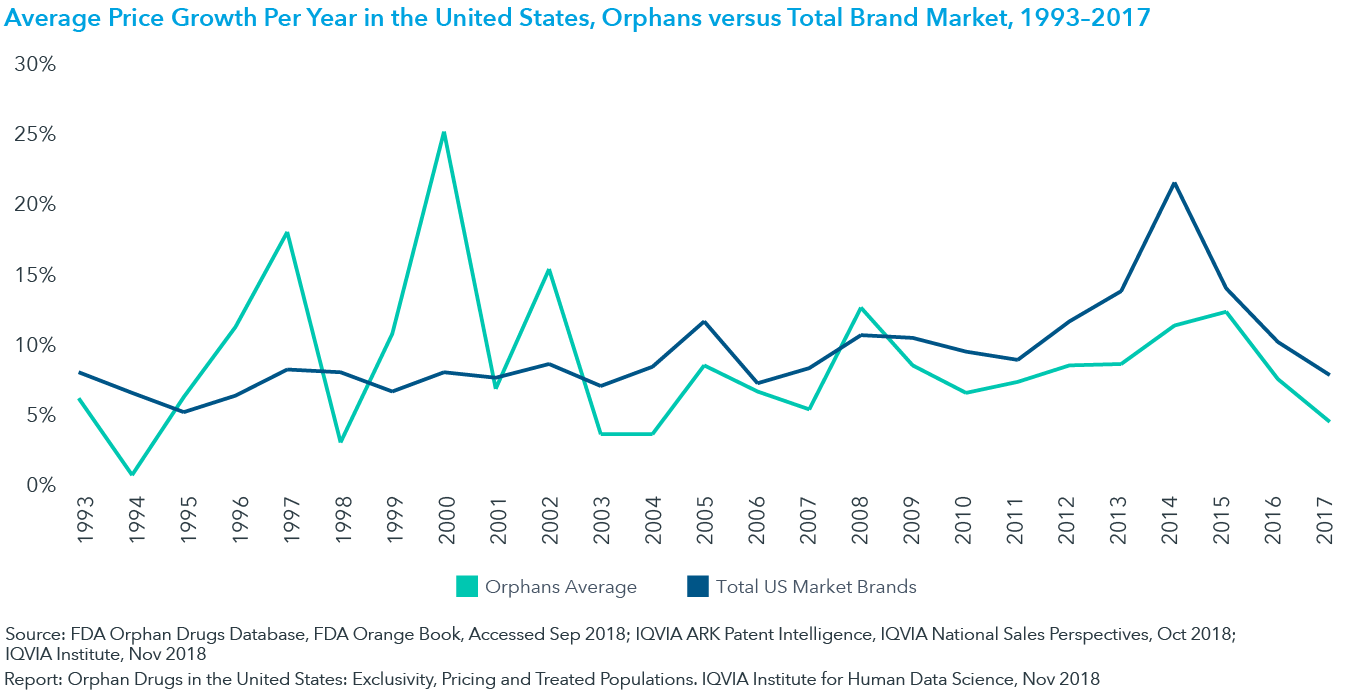 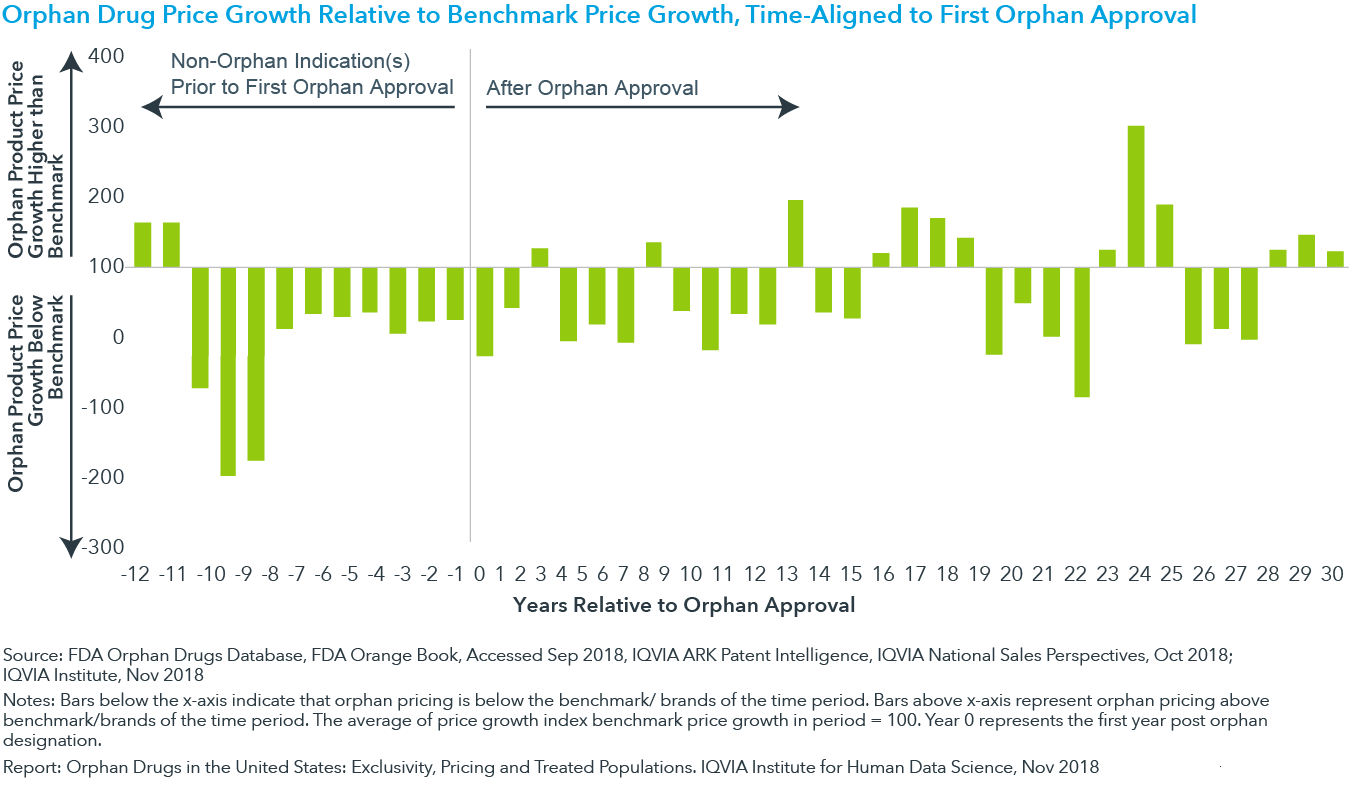 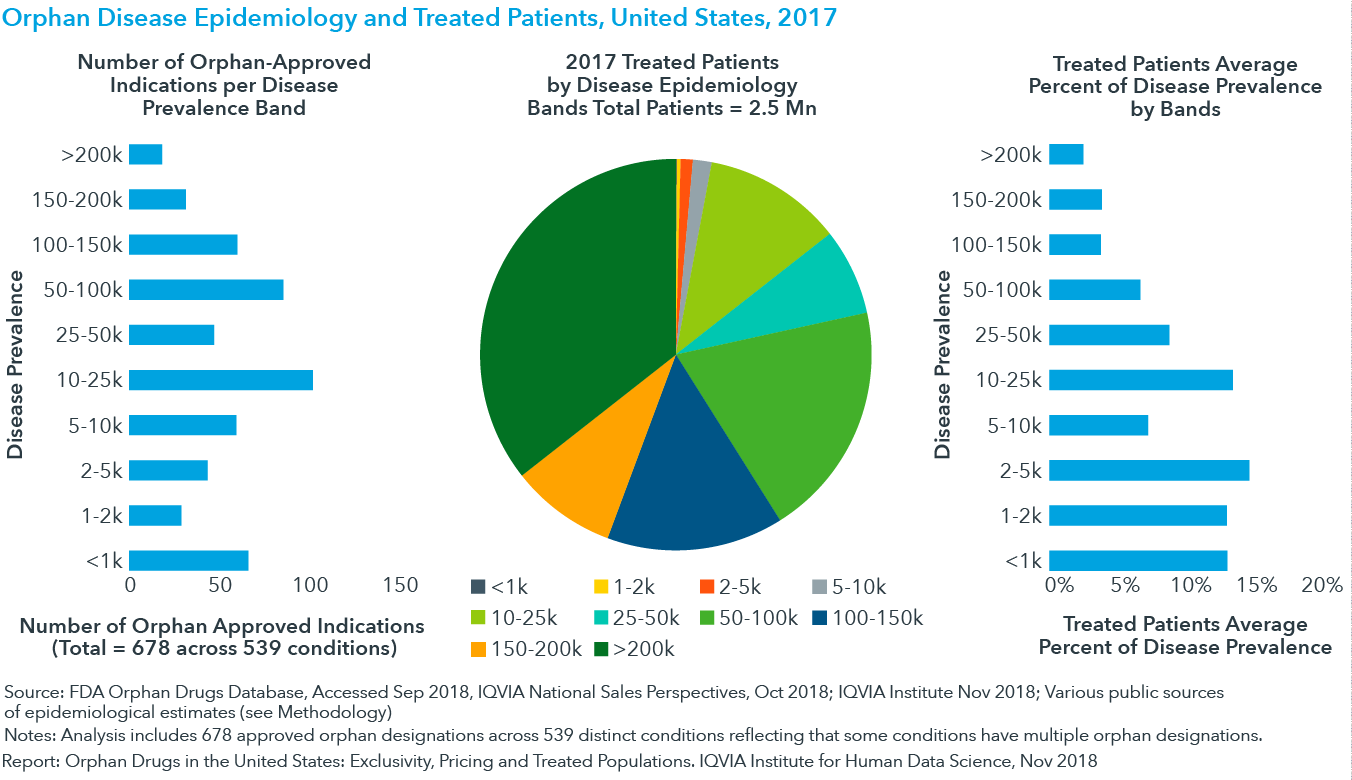 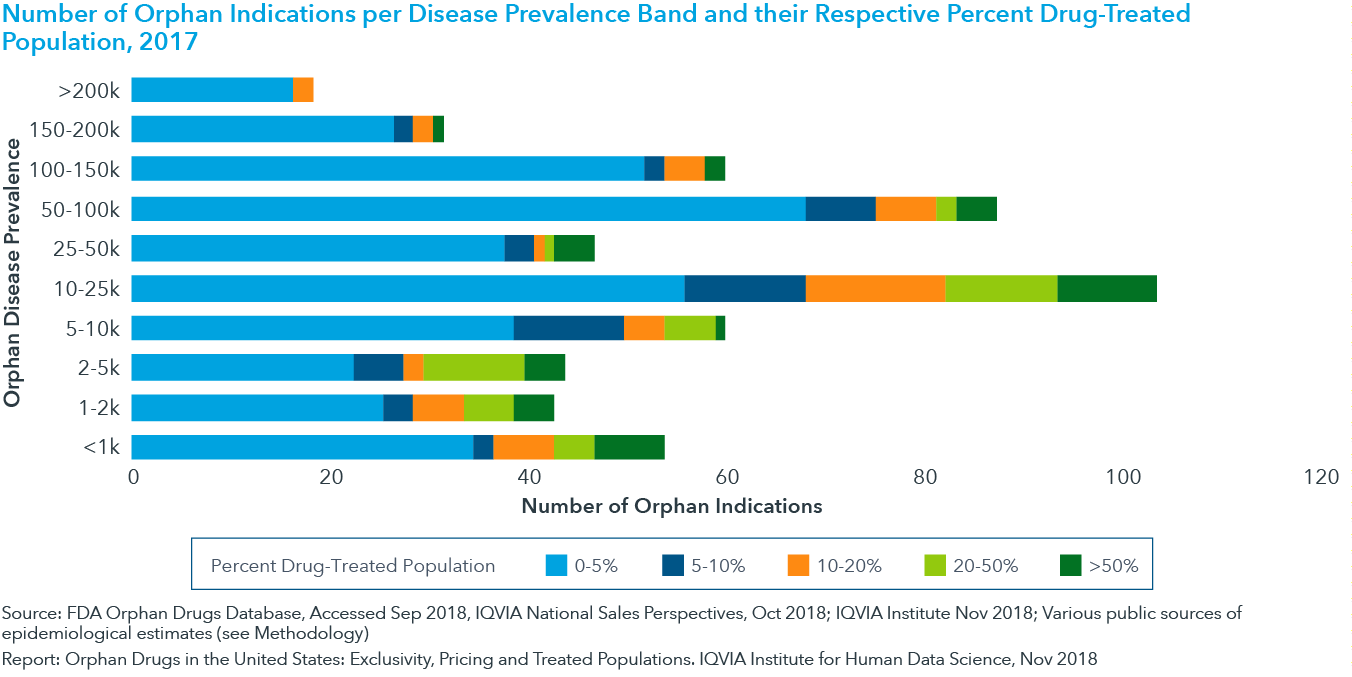