In September 2017, Canada introduced the ‘Certificate of Supplementary Protection’ (CSP) under the Patent Act, upon the recommendation of the Ministry of Industry. The implementation of CSPs allow medicinal products (with first market authorisation) in Canada to potentially extend patent protection for a maximum period of two years. This change to the Canadian patent landscape was required in order to maintain Canada’s commitment with the European Union under the Comprehensive Economic and Trade Agreement.

Patent term extensions (PTEs) have long been established in countries such as the US, Australia, European nations, Japan and South Korea (Table 1). They were designed to allow pharmaceutical companies that have received the first market authorisation, the opportunity to be compensated for their financial investments and time spent on clinical research, in order to obtain market approval. By extending the period of protection on a patent that claims a medicinal ingredient or medicinal combination, generic competitors are impeded from entering the market. The amendments to the Patent Act in Canada allow companies to obtain this form of protection with the Therapeutic Products Directorate (TPD). CSPs can only be applied to a drug product that is market authorised with a Notice of Compliance (NOC) by Health Canada, after the law has come into effect.

The regulations along with the Patents Act outline the amendments, which have been used to establish the CSP criteria. Defined in sections 104-134 of the Patents Act, the Regulations have outlined the specific details of when a CSP can be applied and the scope of coverage. The following summarises a portion of the application criteria:

A CSP application can be filed when:

With more and more drug products facing generic competition, the implementation of CSPs into Canada will be beneficial for pharmaceutical companies attempting to maintain market share for longer periods. Canada, however, has only implemented a maximum term of two years for PTE, whereas other countries with established PTE regulations have opted for a maximum term of five years (Table 1).

The CSP period is calculated by subtracting the patent application filing date from the market approval date, and then subtracting a further 5 years. If this period is more than 2 years, the period of protection will be reduced to 2 years.

At present, only a small number of CSP applications have been submitted. This information can be found in Ark Patent Intelligence, where the CSP will display the status, subject and calculated extension expiry date. 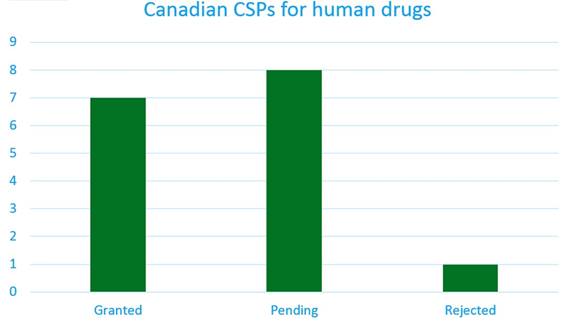 With the change in the Canadian Patent Act, any new innovator drugs that are approved for the Canadian market can apply for CSPs, potentially delaying the entry of generic and biosimilar competition for an additional two years. While CSPs cannot be filed for all drug products that are currently market authorised in Canada, there is the potential for some drug products that are in the market to have their period of protection extended if they fall within the criteria of the Patent Act. Generic manufacturers looking at the Canadian market will need to monitor patent term extension expiries, as this could affect the launch of their products.

Ark Patent Intelligence is produced by IQVIA, a global provider of intelligence for the pharmaceutical sector, and provides solutions to pharmaceutical firms in every continent. To find out more, please visit https://www.iqvia.com/our-customers/generics-manufacturers/ark-patent-intelligence