An understanding of systems biology has allowed for greater insight into the processes that govern disease and has helped to usher in the era of precision medicine—where the right patient gets the right therapy at the right dose and experiences the right response. This report provides key insights into the characterization of systems therapeutics and precision medicines. It also reports on their use and spending though 2016. The report introduces a framework for understanding the unique challenges associated with these therapies including cost, clinical decision making and the roles of healthcare stakeholders.

Recent advances in genomics, imaging, and biomarkers are translating into the development and use of systems therapeutics, which are medicines that target specific pathways to modify the course of disease and are intended for personalized or stratified use in specific patient populations. Precision medicines are a subset within systems therapeutics and have seen a period of rapid growth and acceptance within the healthcare system, bringing the benefit of more effective treatments to patients along with reduced adverse effects. This paradigm shift in medicine will have resounding impacts on all aspects of the healthcare system.

Medicines included in the analysis in this report came with a recommendation or requirement on their label or were based on regulatory or professional-society testing for a specific gene, protein, hormone or viral genotyping. Of these medicines, 58% were from the oncology therapy area, 69% received regulatory approval after 2006, and 80% were from the small molecule drug class. 4.5 billion standard units were used by patients in the ten major developed markets in 2016 out of 4 trillion units for global medicines, with significant use among older, small molecule CNS and breast cancer therapies. Total spending on stratified medicines in the 10 developed markets totaled over $62.8Bn in 2016 and was heavily influenced by oncology and antiviral therapies. The report notes that identification of patients with predictive biomarkers is the most crucial step in the current framework for proper use of precision medicines and this first step is influenced by cost, access to diagnostics as well as physician and payer acceptance. Other challenges identified in the optimal use of precision medicines include geographic availability, appropriate use and pharmacovigilance.

The Number of Precision Medicines Has Increased Steadily Since 1977 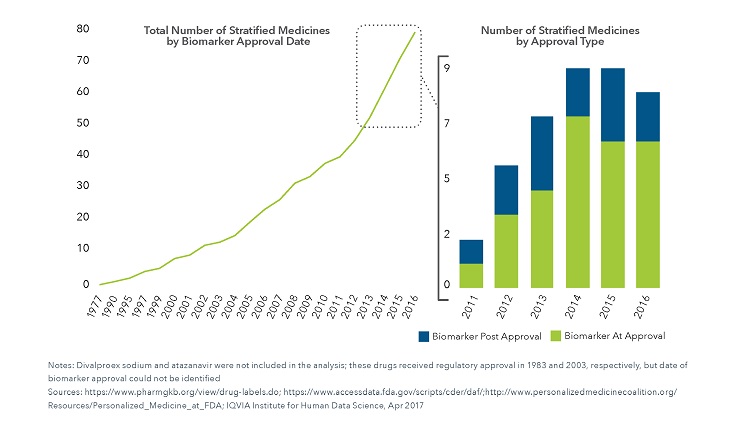 4.5 Billion Standard Units for Stratified Medicines Were Used by Patients in the Ten Major Developed Markets in 2016 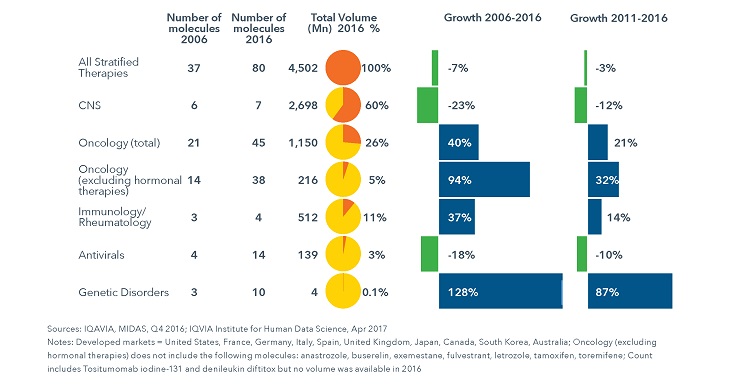