A record number of new oncology drugs has been approved in recent years, bringing new treatment options to patients. However, despite robust levels of pipeline activity, oncology remains a challenging area for research and development. This report examines the productivity and output of the oncology pipeline, new treatment mechanisms, and which patients will likely benefit from new therapies. Our research brings into focus the amount spent on oncology medicines globally, clinical trial activity, complexity and success, and the outlook through 2023. The report also addresses shifts in therapy use with the emergence of immuno-therapies, Next-Generation Biotherapeutics and biosimilars.

A record 15 new oncology therapeutic drugs were launched in 2018 for 17 indications. Over half of the new therapies are delivered as an oral formulation, have an orphan indication or include a predictive biomarker on their label. Recently introduced therapies are also being used more broadly across varied tumor populations and in earlier lines of therapy. The use of immuno-oncology therapies has doubled in the United States since 2017 and treatment with novel CDK 4/6 inhibitors for HER-2 negative breast cancer has dramatically increased in the United States and Europe.

The pipeline of drugs in late-stage development expanded 19% in 2018 alone and 63% since 2013. Within the pipeline and across all phases of clinical development, the most intense activity is focused on nearly 450 immunotherapies with more than 60 different mechanisms of action. Ninety-eight Next-Generation Biotherapeutics – defined as cell, gene and nucleotide therapies - are also under clinical investigation and leverage 18 different approaches.

Despite high levels of pipeline activity, oncology remains one of the most challenging areas for research and development, facing significant risk of failure and long development times. The composite success rate for phase transitions fell to 8.0% in 2018 from 11.7% in 2017, and clinical trial duration remains higher for oncology trials than other disease areas. Clinical trial complexity has also increased sharply for phase I oncology trials over the past five years. The overall productivity of oncology trials – measured as success rates relative to trial effort (complexity and duration) – has improved by 22% since 2010 but remains far lower than trials for other therapy areas.

Spending on all medicines used in the treatment of patients with cancer reached nearly $150 billion in 2018 up 12.9% for the year and marking the fifth consecutive year of double-digit growth, driven entirely by therapeutic drugs which grew 15.9%. The average annual cost of new medicines continues to trend upward, although the median cost dropped by $13,000 in 2018 to $149,000, and cost per product ranged between $90,000 and over $300,000. China led pharmerging markets in spending and growth and grew a remarkable 24% in 2018 to $9 billion in total spending, even as supportive care treatments in China declined by 10%. Over the next five years, growth in therapeutics spending of 11–14% is expected on a CAGR basis, bringing the total market to $200–230 billion.

Over the past five years, 57 newly launched oncology therapeutics received approval for 89 indications, with some drugs treating multiple tumor types 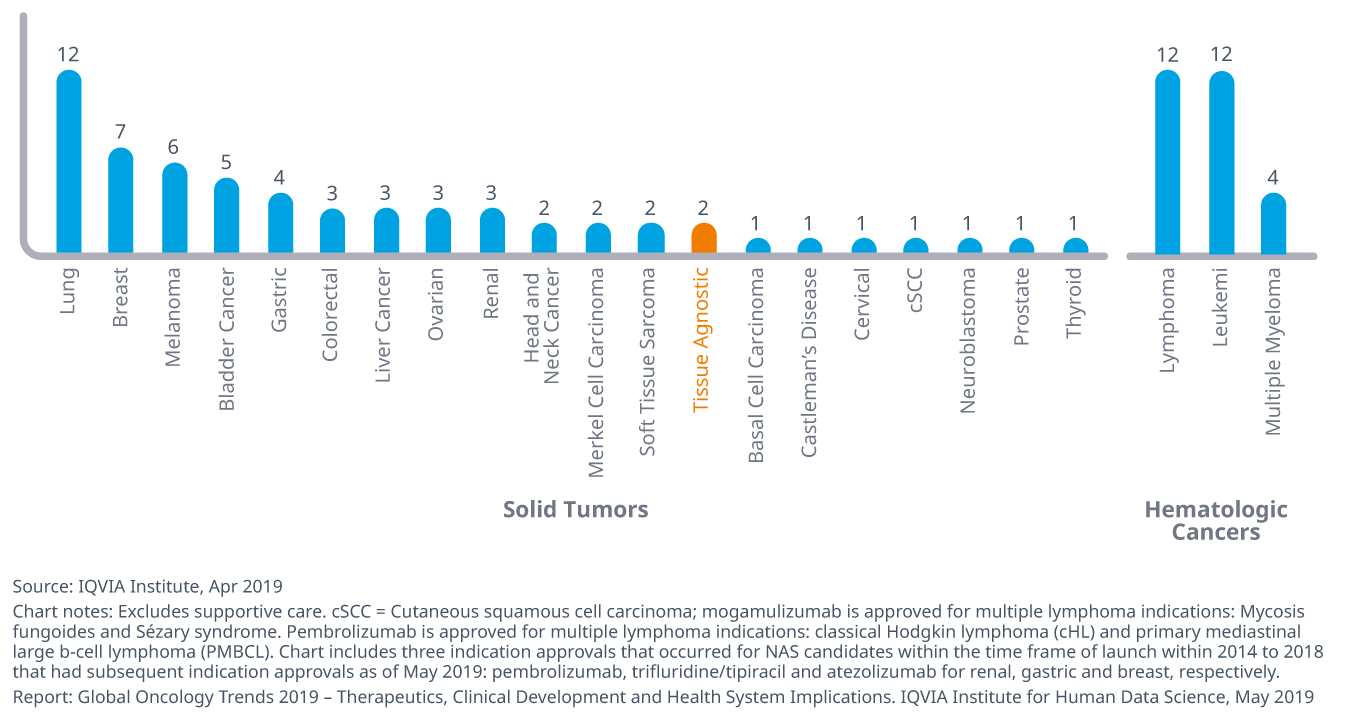 The late-stage oncology pipeline included 849 molecules in 2018, up 77% since 2008, due to the increasing number of targeted therapies

Oncology clinical trials have a high risk of failure with a composite success rate of 8% in 2018, slightly lower than the average since 2010

Modelling the impact of current clinical development trends on future productivity, the availability of pools of pre-screened patients and biomarker tests could yield productivity improvements of as much as 104% and 71%, respectively, by 2023. 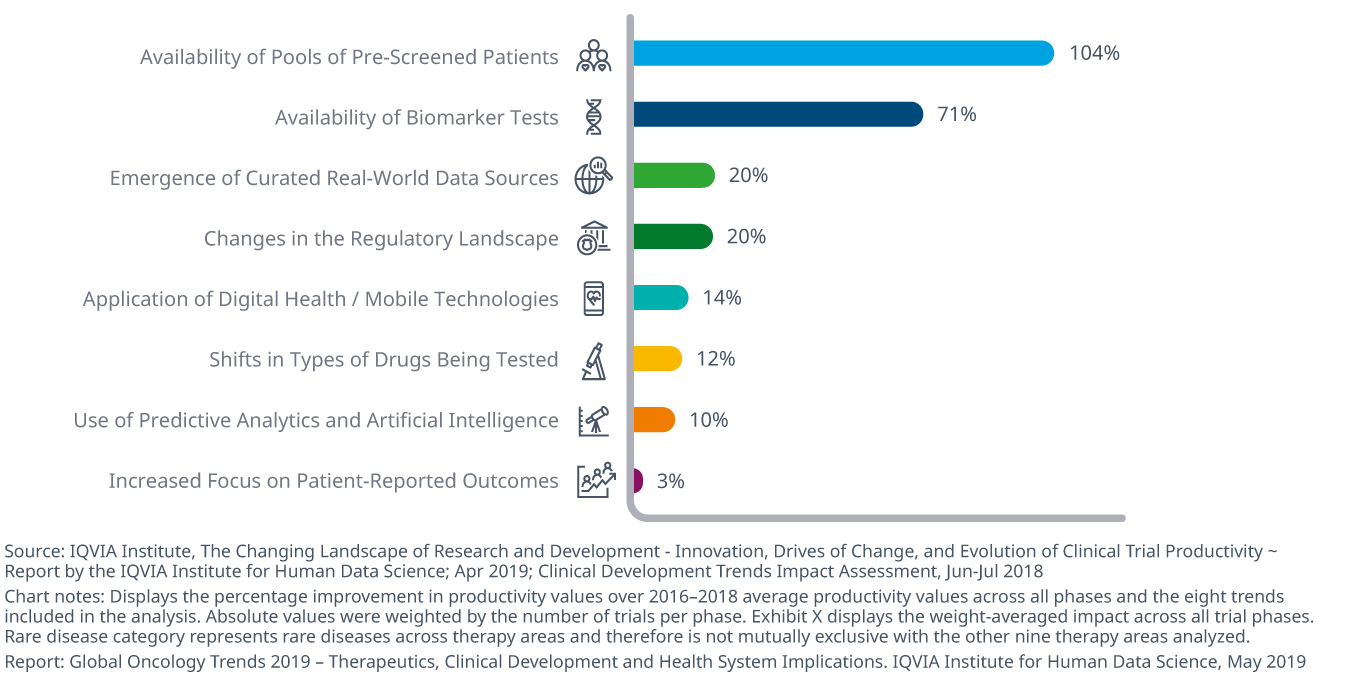 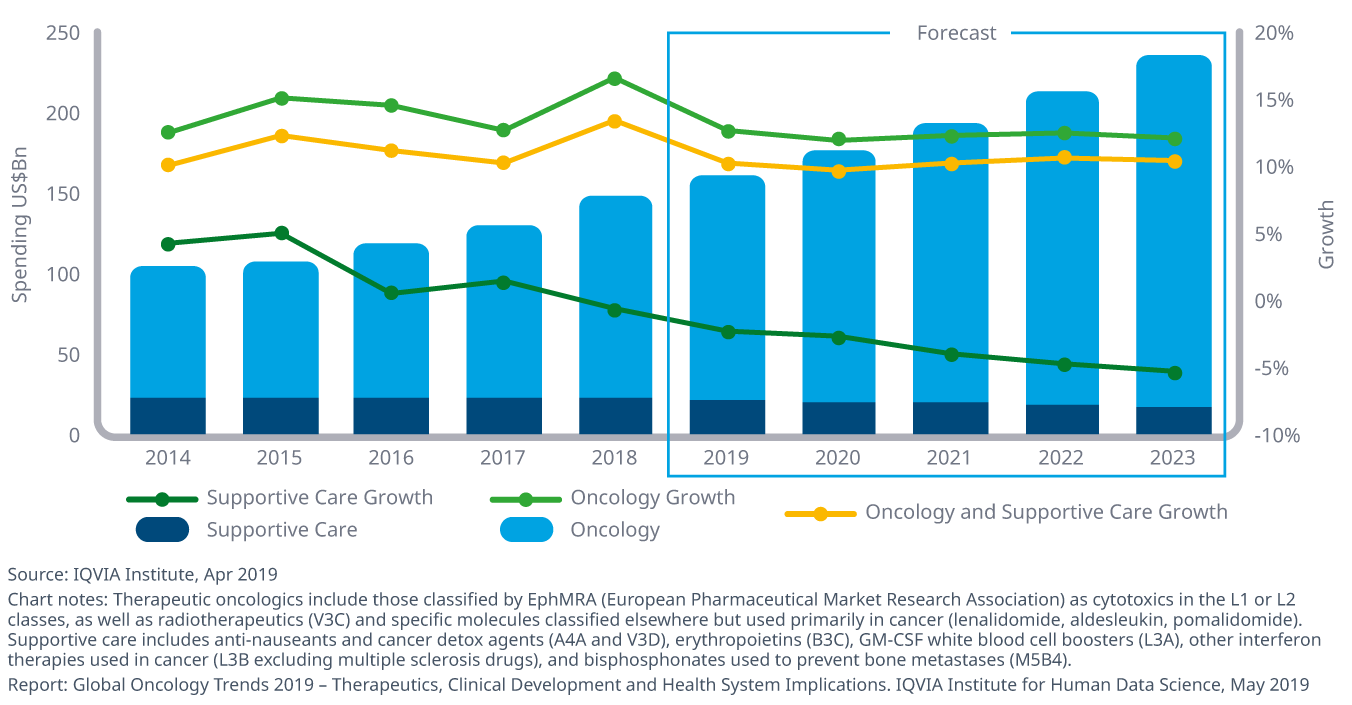