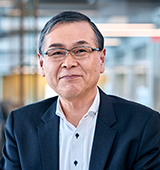 Previously, Minato-san was president of the Asia Pacific and Japan subsidiaries of AT&T, assisting in the globalization of the company’s communications business. Before joining AT&T, Minato-san held positions of increasing responsibility at IBM. His roles there included managing network service planning and development in Japan, leading network service business development for IBM’s Global Network Services Division, and serving as network services marketing manager and director in charge of network operations in Asia Pacific.

Minato-san holds bachelor’s and master’s degrees from Tokyo University, where he majored in nuclear engineering.